How To Determine What You Do Best as a Voiceover 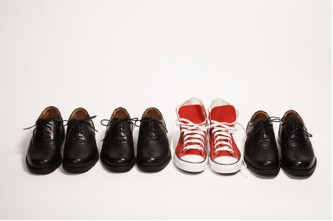 “Who am I?” Now there’s an age-old philosophical question.

Once upon a time, in an alternate universe, I was the perfect Peter Pan type: a sprightly, high-spirited tomboy belting out, “I Gotta Crow!” And, if it wasn’t for a few frighteningly high notes in the “Little Lamb” solo, I was once the ideal Louise in Gypsy: a character who does a complete 180, going from a shy, awkward introvert to a sexy, confident sophisticate.

Fast-forward twenty-some odd years later and it would be safe to say that identifying me with either of these two characters is not only a stretch—it’s flat-out comical!

Okay, so what does that tell us? Your type can and will eventually change. Age range alone will see to that.

Certainly there is a germ of that sassy Peter Pan in me still that now plays out commercially as “the fun mom”. That awkwardly bashful girl–turned–sexually confident sophisticate that was Louise now reads as the confident authority with a trace of vulnerability. All these elements translate into who I am and how I’m perceived in an instant. I’m referring to type.

Type can be especially elusive in voiceover for a number of reasons, besides the obvious. The audience must simply imagine who you are. Additionally, you may discover yourself growing into a type you’ve never played, or graduating out of a type that once felt the most comfortable to you.

The bottom line is: How you look speaks volumes before you even utter a sound. Your face, your build, already has an entire performance built into it. Your presence, whether you realize it or care to admit it or not, says a lot. Hopefully, it’s saying what you intend it to say. Now there’s the rub.

When it comes to voiceover, ask yourself whether what you’re saying is coming across the way you intended? Does your voice have an immediate point-of-view built in to it? Or maybe you see yourself one way, but others might not agree.

Of course, as stage actors we’re generally taught we’re supposed to be everything. You’re expected to be as well versed in Shakespeare as Arthur Miller, as comfortable with comedy as you are with pathos, able to tackle Euripides’ Medea and, just as easily Tyler Perry’s Madea. For what it’s worth, each of these tasks demand a formidable skill level from you as an actor, yet we’re told that’s what being versatile entails, and that’s the job. It’s simply what’s expected of us.

No wonder so many aspiring young talent are confused as to how they’re perceived. Start by studying the medium you intend to work in—television, film, commercial, and voiceover. Record the shows you watch religiously, commercials and all whenever possible. This way you can rewind to study the performance. Study commercials that typically play during the shows you never miss. They are already geared to your specific demographic. You are more likely to book jobs that are within your frame of reference, what you know best, because if the genre is completely foreign to you, it will be a greater degree of difficulty adapting to style or format.

If you don’t watch much TV, do a quick search of the top 25 shows you may have heard of but have yet to see. This is important for a variety of reasons, not the least of which: pop culture references are used most at auditions to give talent a better idea of what those casting are looking for. (“We’re looking for a Jon Snow meets Don Draper type.” To which I have to say, ironically—so am I!)

If you’re at a loss, watch a good eight hours of programming a week for a solid month. For instance: the Today Show, This Is Us, Ellen, NCIS, The Voice, the evening news (as depressing as that may be), The Simpsons reruns on Fox, something on HGTV, something on the Food Network, TLC, History Channel, Animal Planet, and maybe a little something on IFC (Independent Film Channel) and the Sundance Channel. The idea is to record a good cross section of material. Look for commercial examples that cover nearly every demographic.

When you play back what you’ve recorded, whether you’re viewing familiar programs or not, make note of the following:

2. Is the commercial for a product or service you’d find nationwide? Or is it local?

3. Do you use the product/service the commercial is promoting?

4. Do you wish you used/had the product/service (but maybe can’t afford it—yet)?

5. Are you personally opposed to the product/service?

6. Would you appear on-camera in the commercial, film, or TV show?

7. Is there an unusual character affectation in one or more of the voices, or is it a more natural delivery?

8. What is the overall emotional tone of the spot? Is it solemn? Hopeful? Sarcastic? Playful? Stoic? Confident? Is it edgy? Is there an attitude? Is it witty?

9. Does the delivery seem realistic, personable and conversational?

10. Is this spot airing during a show you watch frequently? Or a program you’ve never seen and maybe might never watch?

11. Observe the commercials you got lost in more closely. Make note of what drew you in.

12. Does the voice talent’s age seem to coincide with the age the commercial, film, or program is geared to reach? Or is it the opposite?

Considering most of us stream TV today, use iSpot.TV to study commercials more in depth. You’ll be able to view current commercial campaigns and related ad styles with the luxury of observing the various details listed above.

What you’ll likely discover being yourself is what is required of you a bulk of the time, and that’s far more interesting than watching you desperately try to be something you’re clearly not. An actor shoehorning themselves into something that doesn’t suit them is an effort to watch and ultimately counterproductive. Which is why I’m fine with the fact Peter Pan is forever now in my rear-view and memory. I can live with that. The impact is still felt and brought to heart, and will continue to influence scores of great roles to come, I’m sure.